Recently, I watched all five Hell in a Cell Pay-Per-Views and with the 2014 edition coming up this Sunday, I figured now would be the best time to discuss my ten favorite matches from the history of the event. To open the 2012 edition of Hell in a Cell, Randy Orton met with Alberto Del Rio in a very good match. Del Rio was in the midst of his "new Apex Predator" deal and had targeted Orton, stealing his taunts and everything. Granted, this match was far from perfect as they had one of the greatest botch sequences of all time. However, Del Rio's best matches are the ones where he works the arm and he did that tremendously here. Orton wins a really good match that goes about thirteen minutes. ***1/2

In late 2009, Sheamus moved over to Raw and quickly became the WWE Champion. While his reign wasn't anything to write home about, he would win the belt back in June of 2010. Randy Orton dethroned him at Night of Champions and he got his rematch inside of his first Hell in a Cell. What followed was a match that was much better than I expected. Neither guy is known for having bad matches but they never seemed to click together. The only time would be here as they put on a great show for 23 minutes. Orton retained with an RKO in a bout that surprised me. ***1/2

Hey look, it's more Randy Orton! This should be fresh in your memory but Daniel Bryan bested John Cena at SummerSlam 2013 only to have Orton cash in Money in the Bank on him. Bryan won the belt back at Night of Champions but was stripped and the title was vacant coming into the show. Shawn Michaels was placed as the referee which added intrigue because he trained Bryan, dislikes Orton and is Triple H's best friend. These two never had bad matches together and this was a very good 22 minute bout. Triple H got involved and Bryan hit him with a running knee leading to Michaels' Superkicking Bryan and allowing Orton to win. ***1/2

In the summer of 2010, the hottest angle in wrestling was the Nexus. They debuted and destroyed John Cena, instantly making them must see television. While their momentum hit a brick wall at SummerSlam, Wade Barrett met John Cena with everything on the line at Hell in a Cell. If Wade won, Cena would have to join Nexus but if Cena won they would have to disband. This was Wade's first big time singles match and he delivered, showing that he did belong with the main event players. After 17 minutes, interference from the future Bray Wyatt and Curtis Axel allowed Wade to get the incredibly shocking win. ***1/2

This went down on the first Hell in a Cell Pay-Per-View and we are going to see it again this Sunday. The upcoming match probably won't be anywhere near as good as this. Randy Orton was at his peak as 2009 would be the year of the "Viper". He and Cena had far too many matches this year but this would be the best by a fair margin. I've never been into their stuff because their chemistry if very off. However, on this night, everything came together. Orton used some pretty vicious tactics, including a sleeper hold on the ropes that led to an RKO and the victory to become the new WWE Champion. ***3/4

5. WWE Tag Team Championship: The Brotherhood (c) vs. The Shield vs. The Usos

WWE has made plenty of mistakes with the tag team division over the past few years but 2013 saw a bit of a resurgence. Team Hell No and the Shield put on some really good matches before the Shield and Usos had a classic on the Money in the Bank Kickoff Show. Things got to a different level when Cody Rhodes and Goldust joined the fray and took the titles from the Usos. After a great match at Battleground, Hell in a Cell 2013 started with a bang as these four teams stole the show. It started a bit slow, but once it picked up, it didn't stop. 14 minutes of fantastic tag team wrestling that ended with the Brotherhood retaining. **** 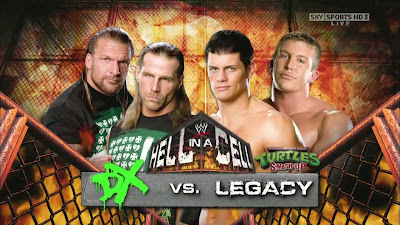 In 2009, neither the World Heavyweight Title nor the WWE Title main evented the show. Instead, the culmination of the DX/Legacy feud got to go on last. After a great match at SummerSlam and another great one at Breaking Point left the series tied at one, this needed a decisive winner. Legacy attacked early and actually locked Triple H out of the cell. Storytelling was key here as Legacy delivered a two on one beating on Shawn Michaels. As we all know, nobody takes a beating better than Shawn. Triple H did a great job of showcasing how desperate he was to get in. He finally did with bolt cutters and turned the tide of the match. Ted Dibiase got locked out, leading to a Sweet Chin Music/Sledgehammer shot combo on Cody to end it. ****

The two best singles matches of The Miz's career came against Daniel Bryan at Night of Champions 2010 and against John Morrison on Raw to start 2011. Put both guys in the ring with him, adding in the creative idea of Submissions Count Anywhere and you get a great outcome. All guys were at their best and using creativity. Bryan put a figure four on Morrison that wasn't broken by the ropes due to the stipulation. They rolled to the floor and the hold stayed on. Miz used a dragon sleeper on rails in the crowd and Bryan busted out the cattle mutilation! After 13 or so minutes of non-stop action, Bryan won by making Miz submit to the LeBelle Lock. Great stuff. **** 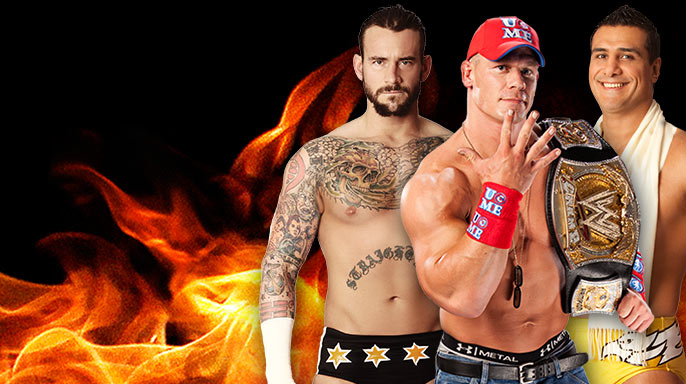 2011 wasn't exactly a bright spot for Hell in a Cell but the main event easily made the show worth it. The WWE Title went through some an awful hot potato run that year as it went from Cena to Punk to Rey to Cena to Punk to Del Rio to Cena to Del Rio and back to Punk from July until November. On this night, Del Rio would win the title for the second time in a classic Triple Threat match after locking Cena out of the Cell. The most interesting not was that after the match, Awesome Truth stormed the ring and beat up all three guys, the referee and the camermen while Triple H and the roster desperately tried to enter the Cell. Fun stuff. ****1/4 Talk about surprises. I never expected that this would top my list. Big Show was in the midst of his yearly run to a title match and Sheamus was in the middle of a severely underrated run as World Champion. I wish that this got to be inside of the Cell because it could've been even better. Regardless, this was built over the previous weeks as the WMD vs. the Brogue Kick and it played a big role in the match. Both men kicked out of each other's finishers, marking the first time that had happened in either case. Sheamus would try a second Brogue Kick but Show would catch him with the WMD and capture the title. Surprisingly great match. ****1/4
Posted by Unknown at 9:16 AM No comments: