With all of the build and hype being done on WWE television for Team Cena vs. Team Authority at the upcoming Survivor Series Pay-Per-View, it made me think about doing this top ten. Stephanie McMahon says she wants Team Authority to be the greatest team in Survivor Series history, but they have a long way to top these teams. An honorable mention goes out to Team Smackdown in 2005 and Team Savage in 1987 but they had weak links in Bobby Lashley and Jim Duggan.

We're focusing on the team on the right here. Team Miz. The Miz was in the midst of a huge run towards the WWE Title and put together a team of future stars. Dolph Ziggler, who would become a two time World Champion and Jack Swagger, a one time World Champion, would get eliminated. Miz would survive along with future multi-time World Champion Sheamus and Drew McIntyre. It was clear that the WWE had big plans for all of them and while most never panned out, this was an extremely talented team. Jack Swagger makes the list again but man, this team was loaded. Granted, the opposing team is not full of slouches. The Brotherhood, Rey Mysterio and the Usos are all talented guys. The heels though, are on another level. Swagger is talented and Cesaro, while void of a personality, can go with the best of them and nearly never has a bad match. Then there's the Shield. Seth Rollins is the current Money in the Bank holder and the future of the WWE. Dean Ambrose is arguably the most entertaining part of the WWE currently. Roman Reigns is possibly the company's next mega star. The Shield was something special and the Real Americans were a badass team. Roman Reigns would be the sole survivor and eliminate four of the five opponents and kick start his uber push.

Diesel was the key player in 1995 for the WWF but in order to get there, he had to turn face on Shawn Michaels. That would happen during this Survivor Series match against Razor Ramon's "The Bad Guys." The team was very good as we all know how impressive Diesel and Shawn were, but it also had Owen Hart, in the midst of a fantastic 1994, and solid workers like Jeff Jarrett and Jim Neidhart. The team dominated until Shawn pissed off Diesel, leading him to chase Shawn to the back. The rest of the team followed and all got counted out. It was a dumb ending but was the first big step in Diesel's rise to the top. He would win the WWF Title days later in fact. This was a damn good team. First, you had THE GUY in the 80's, Hulk Hogan. That is enough to pretty much guarantee that the team would not lose but the rest of the team is excellent. Demolition is one of the best tag teams that I can remember and Jake Roberts is one of the best guys to never win the World Title. The surprising thing is that this team went on in the mid-card and, while Hogan being the sole survivor was predictable, it made sense. 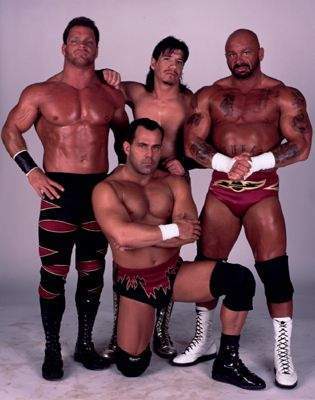 As a team at Survivor Series they weren't very successful but they have to be near the top in pure talent. While Perry Saturn and Dean Malenko may not have had big time careers in the WWF but they could be counted on for good matches. Chris Benoit, before his 2007 debacle, was one of my favorite wrestlers of all time. The man made it to the top of the company in 2004 and the same goes for Eddie Guerrero. A fantastic team of talent even though they lost when they teamed up in 2000.

I truly miss the late 80's and early 90's when Survivor Series was totally focused on the elimination matches. In 1990, the then WWF Champion, The Ultimate Warrior put together a team of "warriors" and it was a fitting name. Kerry Von Erich was highly touted and the Legion of Doom were also known as the Road Warriors, so they fit in for sure. The team was impressive and they opened the show, with Warrior being the sole survivor. He would go on to the "Grand Finale" match which featured all of the night's survivors and survive then too, along with Hulk Hogan. 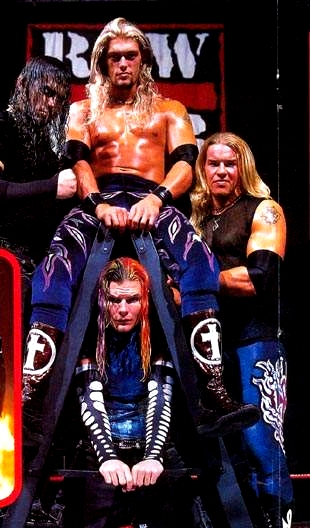 One month removed from turning themselves into superstars, Edge, Christian and the Hardy Boyz would join forces at Survivor Series. After they stole the show at No Mercy, people were foaming at the mouth to see these guys on the same team. While they didn't really deliver, the obvious talent and chemistry is there. I feel that the WWF missed the boat by having them lose to The Hollys and 2 Cool. Terrible booking move as they could've capitalized on the momentum that these guys had. Oh well, it didn't bite them in the end as the four guys went on to have successful careers. 2003 featured Team Austin vs. Team Bischoff as the two men ran Raw together. Before we get into the key moment of the match, let's talk about the team. The Dudley Boyz are the most decorated tag team in history. That's a good start right there. Next up, Rob Van Dam and Booker T are two guys who would win World Titles and can always be counted on to deliver. Then, you have Shanw Michaels, quite possibly the greatest performer in the history of pro wrestling. The key point is that Shawn Michaels was left alone against Christian, Chris Jericho and Randy Orton. Michaels put on one of the greatest performances of his career as he rallied and nearly won before falling to an RKO. Go out and see this match because Michaels is phenomenal. 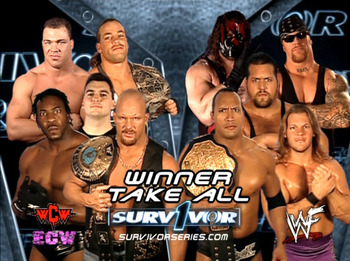 The Alliance vs. The WWF storyline was poorly done as the WWF guys dominated. I'd like to point out that at WWF Invasion a few months earlier, there was a ten man tag with two great teams. Austin, Angle, Jericho, Undertaker and Kane against Booker, The Dudley Boyz, DDP and Rhyno. Good stuff. Here, Team Alliance disappointed due to Shane McMahon being on the team. I love Shane, but he's the clear weak link. Team WWF was badass though. Big Show was the worst member, and was eliminated first. But then you have the top guy at the time, The Rock, the hottest rising star in Chris Jericho and then the Brothers of Destruction. Team WWF would win a great 45 minute bout as The Rock survived for Team WWF. 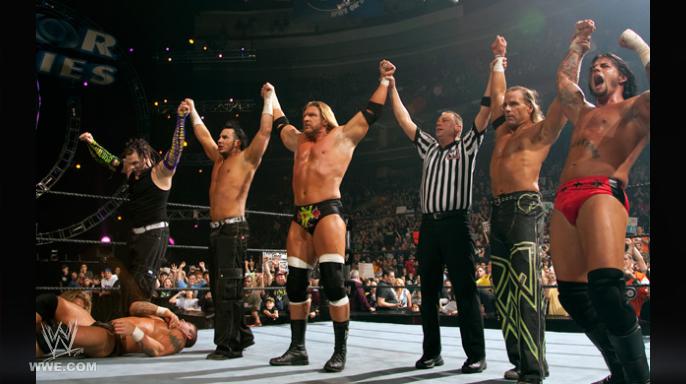 Only one team on this list completed the rare clean sweep at Survivor Series and it was these guys. For good reason too. DX features two of the greatest Superstars in WWE history and the Hardy Boyz are one of the best teams ever. CM Punk, the fresh act, was the wild card in this match but he proved he belonged. The match had fun moments like Mike Knox being eliminated within seconds and Shawn MIchaels asking "who was that guy?" The other team consisted of Randy Orton, Edge, Knox, Johnny Nitro and Gregory Helms. Team DX annihilated them and rightfully so. There has never been a greater group of talent on one team.
Posted by Unknown at 9:03 AM No comments: