As I did with my Destruction in Kove predictions, I won't be predicting the entire card, but just the bigger matches. 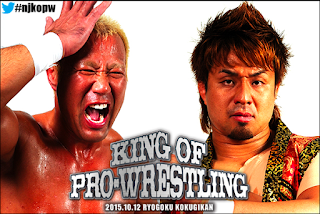 The first featured match pits two guys who don't particularly have the best win/loss record. I haven't seen much of YOSHI-HASHI's work, but I've seen a lot of Tomoaki Honma. He went winless in the 2014 G1 Climax, but his performances and efforts made him a crowd favorite. He nearly went winless this year again, but managed to defeat rival Tomohiro Ishii in the tournament. YOSHI-HASHI is stablemates in Chaos with Ishii. It'll be tough to pick a winner here, since it's hard to pick either as a winner ever, but I'm going with the undeniably popular Honma. 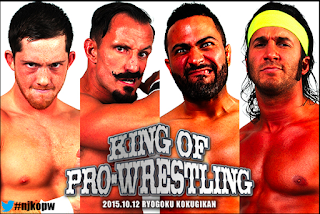 The IWGP Jr. Heavyweight Tag Team Championship has been hotshotted back and forth very often since I started watching NJPW. reDRagon to the Young Bucks to Roppongi Vice back to the Young Bucks and now back to reDRagon. Personally, I want the titles to stay on reDRagon. They are a breath of fresh air and break up the monotony of the division, bringing something different to the table. They are also, in my humble opinion, the best tag team in pro wrestling today. Now, I do like Roppongi Vice and, with the booking of the division, I can totally see them leaving with the belts, but I'm picking the titles to stay home. I have to be optimistic. 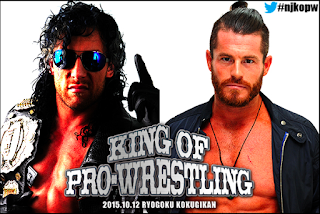 Speaking of hot shotting titles, we come to the IWGP Jr. Heavyweight Championship. KUSHIDA won the Best of the Super Juniors Tournament and dethroned Kenny Omega to become champion. That should have been the start of a great run with the strap for KUSHIDA. Instead, he lost the title at Destruction back to Omega, setting the division back to where it started and giving us next to no forward movement. Matt Sydal is the challenger here, having just made his New Japan debut in some impressive matches. Sydal pinned Omega in Kobe, so I see Omega defeating him with Bullet Club shenanigans here. While this title hasn't gone back and forth the way that the Jr. Titles have, it has pretty much involved the same dudes all year. Tomohiro Ishii lost the title to Togi Makabe, who then vacated it due to injury. Ishii won it there, only to lost it back to Makabe and lose the rematch. These two have faced off very often and it's never exactly what I would call a must see match. I'm not really looking forward to this but I kind of see Ishii winning the title here. Or at least, I hope he does. Maybe it can lead to one final Honma/Ishii match for the title. 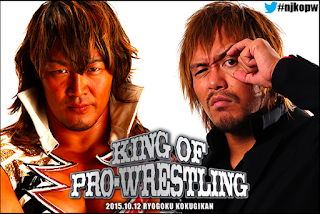 Hiroshi Tanahashi won the G1 Climax this year, getting himself an IWGP Heavyweight Title at Wrestle Kingdom in the Tokyo Dome. He has to defend that shot against the men who beat him during the tournament. So far, he avenged his loss to Bad Luck Fale at Destruction and now has to face Tetsuya Naito. I've grown to really love Naito's heel persona and would honestly love to see him win here. A heel Naito beating Kazuchika Okada at WK10 by countering the Rainmaker into Desinto and then reigning with the belt while being a total dick would be excellent. That won't happen though. Tanahashi wins here so he can officially put over Okada in the Dome. 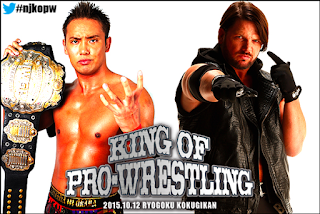 Another match that has happened multiple times is our main event. AJ Styles gets a shot at the IWGP Heavyweight Champion, Kazuchika Okada. These are two of the three men who have traded the title over the past four or five years. Okada won the strap from AJ back in July in one of my favorite matches of the year. Their interactions in multiple tag team matches this year have also managed to deliver, so this should be another excellent match. The main issue is that it's another where the outcome seems fairly obvious. Still, I'm excited for it.

Winner: Kazuchika Okada
Posted by Unknown at 8:22 AM No comments: