In no way am I saying that this the definitive list of the best matches in WrestleMania history. That would be incredibly hard to officially make. Instead, I chose to rank my favorite WrestleMania matches. Some are among the best matches I've ever seen, and some just hold a special place in my heart. 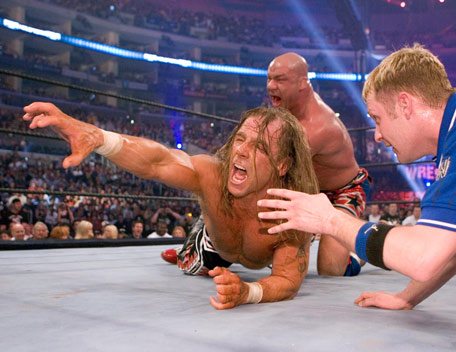 10) WrestleMania 21; Kurt Angle vs. Shawn Michaels - The buildup to this match is part of what made this so special to me. Kurt Angle was pissed that he won a gold medal and all he kept hearing about was Shawn Michaels and his win in the Ironman match. That made Angle obsessed with proving that he is the best wrestler in the world. Sometimes, that's all a rivalry needs. To find out who the better man is. The match delivered and remains an absolute blast to watch. It was a first time ever bout and saw Michaels do something he rarely does, which is tap out. An all around fantastic match. ****1/2

9) WrestleMania XXX; WWE World Heavyweight Championship: Randy Orton (c) vs. Batista vs. Daniel Bryan - Here's a perfect example of why this list isn't the best matches in WrestleMania history. While this is damn good, it's not better than the previous one on my list. However, I've been a massive Daniel Bryan fan since I first saw him on the indies nearly ten years before. Seeing him work his way to the main event of WrestleMania and win the WWE World Title was an incredible experience. He went over Evolution, won two matches, did a false stretcher job and more on his way to this awesome showing. I loved everything about his performance. ***3/4

8) WrestleMania 24; World Heavyweight Championship: Edge (c) vs. The Undertaker - Back at WrestleMania 21, I honestly thought Randy Orton would end the Undertaker's streak. I didn't feel that way again until WrestleMania 24. Edge was on a fantastic run and faced Undertaker in the main event. They went on last on a show that featured Ric Flair's retirement and John Cena, Triple H and Randy Orton in a Triple Threat match. Edge made believers out of every doubter and came close to winning several times. This may not be the best match on this list, but it's a personal favorite considering my love for Edge. ****1/2 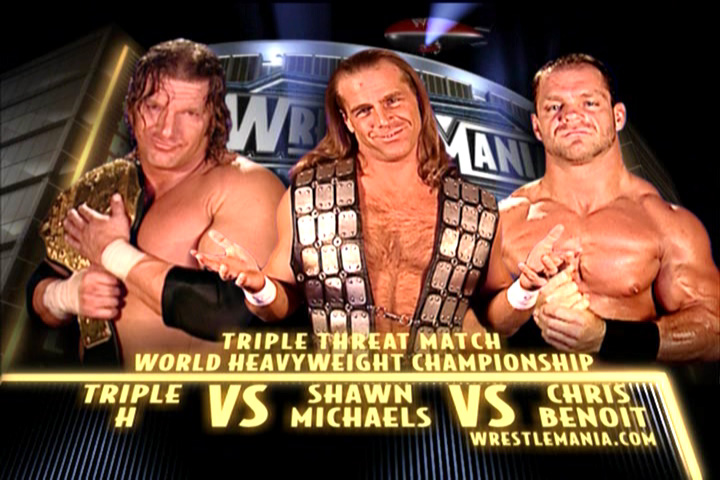 7) WrestleMania XX; World Heavyweight Championship: Triple H (c) vs. Shawn Michaels vs. Chris Benoit - Similar to the Daniel Bryan story ten years later, Chris Benoit was a workhorse technician who scratched and clawed to the top. After winning the Royal Rumble, he got the main event spot at WrestleMania in Madison Square Garden and these three delivered. We already knew that Michaels and HHH had great chemistry, but Benoit just added to it, giving us one of the best main events in history. We don't talk about it anymore for obvious reasons, but Benoit winning and celebrating with friend, then WWE Champion Eddie Guerrero, is a moment in time. ***** 6) WrestleMania X; WWF Intercontinental Championship Ladder Match: Razor Ramon (c) vs. Shawn Michaels - The Kliq explodes! Shawn Michaels makes the list yet again with his first true show stealing performance at WrestleMania. This was the real start of the Mr. WrestleMania nickname. Bret Hart and Shawn Michaels worked the first ladder match in WWF history, but Shawn and Razor got to do it on the big stage and put it on the map. This wasn't about who could hit the highest spots, though there certainly were some. It was about telling a story and the ladder was involved. Holds up to this day. ***** 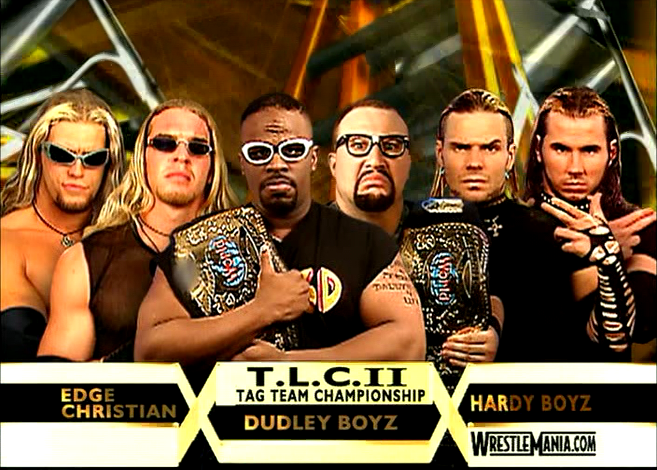 5) WrestleMania X-Seven; WWF Tag Team Championship TLC II: The Dudley Boyz (c) vs. The Hardy Boyz vs. Edge & Christian - So, that last ladder match on my list wasn't all about the spots. This one however, had a ton of them. This is sixteen or so minutes of non-stop action. All six guys go out of their way to one up their already incredible performances at the previous year's WrestleMania and SummerSlam. The addition of Lita, Spike Dudley and Rhyno added a new intangible to the match. It also features one of the most memorable spots in history when Edge hit Jeff Hardy with the biggest spear in history. Breathtaking stuff. ***** 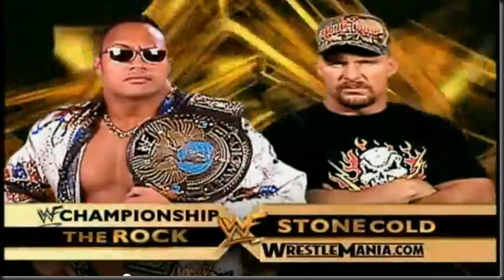 4) WrestleMania X-Seven; WWF Championship: The Rock (c) vs. Steve Austin - Honestly, any of their three WrestleMania matches could have made this list. I love all three, but this was the best. The "Empire Strikes Back" of this trilogy was outstanding. Both guys were arguably at their peak and the crowd in Houston lost their minds at the sight of Steve Austin. This was a perfectly booked WWF style main event. There was brawling, wrestling, false finishes and everything in between. The only thing that I disliked was the fact that Austin turned heel in the end. Other than that it is absolutely perfect. ****3/4

3) WrestleMania X; Bret Hart vs. Owen Hart - The greatest opening match in history. Not just WrestleMania, but literally all of professional wrestling history. The rivalry between brothers was excellently built over the previous four months. Bret knew he was going to have to pull double duty, but did not hold back. These two countered each other throughout and had one of the best actual pure wrestling matches that I've ever seen. I can rewatch it over and over, yet it never gets old. Having Owen win with the rollup was brilliant as it kept Bret strong but gave Owen the win to launch his major 1994 push. ***** 2) WrestleMania 25; Shawn Michaels vs. The Undertaker - I remember when this match was announced. I wasn't even that excited. I understood the historical significance and even though both guys are among the best ever, they were never on my list of absolute favorites. However, Michaels was untouchable at WrestleMania and Undertaker was smack dab in the middle of his best string of matches at Mania. The entire bout, I was on the edge of my seat and I don't know if a bunch of false finishes has ever been done better. They took the fans on an emotional roller coaster that didn't stop until Undertaker got the final three count. *****

1) WrestleMania 13; I Quit Match: Bret Hart vs. Steve Austin - It's incredible to think that this match wasn't the original plan. I'm so happy that it did though because Bret and Shawn could not hold a candle to what these two went out and did. After having a classic at Survivor Series a few months earlier, all they did was add to it. The brawling, Ken Shamrock as referee, the drama, the blood, this is literally everything I could ever want in a match. It MADE the Stone Cold character because he refused to submit. It is, to this day, the perfect double turn and the perfect match. *****
Posted by Unknown at 10:06 AM No comments: